The first time I met photographer Dave Southwood was the same day that I’d plucked up the courage to visit my then-crush/now-husband Paul Edmunds, while we were all post-grad students in Pietermaritzburg. It was also the first day that Dave had ever visited, so he and I have known Paul for exactly the same length of time. What I still don’t know, however, is why he chose to wear mismatched knee-high rugby socks on that day (or any day, for that matter).

After our studies, we all ended up in Cape Town, where we continued our friendship, and then when Paul and I got married, Dave drove me to the wedding in his silver mercedes, festooned with lurid fake flowers.

He’s been a good friend for a long time, and I think the event that clinched it was when, within a few weeks of meeting, Dave presented me with a spectacular stripey knit that he’d found in one of the secondhand shops we all loved to haunt. It seemed like exactly the kind of thing he’d like to wear, but for some reason, he chose to give it to me. So when I discovered a few weeks ago that the moths had gnawed that long-cherished token of friendship nearly to bits, of course it was impossible to throw out, even though I actually never wear it any more.

Thus began a series of evenings on the sofa at home, armed with my CowgirlBlues yarn stash (thanks, Bridget!), carefully stitching the holes closed. My first few attemps were pretty hack-handed, but I soon figured out that if I stitched a piece of linen behind the hole, I could use it to secure a ‘warp’ of threads, through which I could then weave stripes of colour, which blend in really well, if you weave them nice and tight. It really is far from perfect, which makes it a great example of the concept of wabi-sabi – a tradition of Japanese aesthetics, taking a world view centered on the acceptance of transience and imperfection. Or, as I said in the title of my post, it’s what your grandmother might have called “mending”.

And, as seems to be the case with everything these days, “mending” has turned into a bit of a movement, with hashtags and heros and how-to books abounding. Tom of Holland appears to be the boss mender, running a cool Instagram account, as well as the Visible Mending Programme, about which he says:

“The Visible Mending Programme seeks to highlight that the art and craftsmanship of clothes repair is particularly relevant in a world where more and more people voice their dissatisfaction with fashion’s throwaway culture. By exploring the story behind garment and repair, the Programme reinforces the relationship between the wearer and garment,  leading to people wearing their existing clothes for longer, with the beautiful darn worn as a badge of honour. “

Other Visible Menders I came across include the funny Kate Sekules who, despite her past as a magazine editor, is very concerned with the messed-up consumption patterns in the fashion industry. 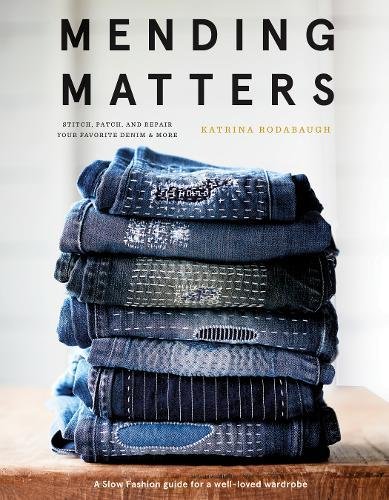 I also came across a book by Katrina Rodabaugh called Mending Matters, which is available for pre-order for an October release. Alongside techniques the book addresses the way mending leads to a more mindful relationship to fashion and to overall well-being, which is exactly how I have been feeling since having stitched all those motheaten holes closed.

Or, as my grandmother might have put it: I’ve been feeling smug.

6 replies to “Wabi Sabi … or ‘mending’, as your Granny called it”